Peter our newsletter editor has recently been reading the Benefits & Work website which carries an article about benefit cuts & what could happen in the pending general election.

It is Your Choice & Your Vote & you must decide on your vote.

‘Vote for your life’ is the advice being given to disabled people and carers by the Benefits & Work website, which does so much to expose the unfairness and discrimination in the benefits system.

It is warning that Iain Duncan Smith has threatened ‘dramatic’ and ‘life-changing’ benefits cuts if the Tories retain power on7 May. That could include:

For many, these will be life-threatening cuts, rather than life-changing ones, says B&W, but adds: ‘Claimants are in a position to prevent them happening.And it won’t take a miracle.

‘In fact, just an additional 5% turnout by working age claimants could have a dramatic and life-changing effect on IDS and his plans instead.

‘But a higher turnout won’t happen by itself. Labour are too frightened of the tabloids to try to rally claimants. Many of the major charities and disability organisations have been scared into silence by the Lobbying Act. And the media has little interest in benefits cuts, other than to applaud them as a good thing.

‘So it looks like it’s up to ordinary claimants to make sure as many other claimants as possible understand the threat they are facing.’The tool for those dramatic changes is £12 billion of cuts to benefits in just two years.

‘So far, we only know where £2 billion of the cuts will come from – a freeze on working age benefits. The Conservatives are refusing to say where the other savings will be made.’

However, a document leaked to the BBC says limiting child benefit to the first two children is under consideration.

Other proposed cuts include replacing industrial injuries benefits with an insurance policy for employers, regional benefit caps and changes to council tax.

According to the Institute for Fiscal Studies: ‘If all of these were implemented, the total saving would be likely to fall well short of the missing £10 billion per year that the Conservatives intend to find by 2017–18.’

So, what else might be in the firing line? Who can say!

Duncan Smith, Osborne and Cameron have all said no details of the cuts will be given before the election.

Clearly, the most important thing you can do is to make sure you are registered to vote and then actually vote for a candidate who can keep the Tories out, if that’s possible, in your constituency.

Alert other claimants and carers to the dramatic threat they face and try to persuade them that voting isn’t a waste of time. It is no longer true that all the parties are the same.

Don’t imagine that your voice can’t make a difference.There will be many seats where the winner’s majority is in the low hundreds, some where it will be less than a hundred. Even a 5% additional turnout by working age claimants could make the difference. If you can convince a handful of people to vote and to talk to other claimants, you could genuinely help to change the course of this election. 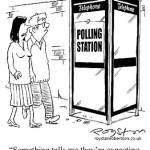 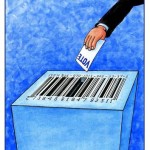 Reminder: If you have recently moved or are not registered then you must register by 20th April to vote in the General Election on 7th May then visit www.gov.uk/register-to-vote to apply to register online.