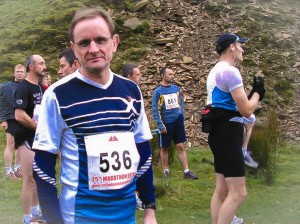 SDN are delighted to announce one of our members Vic Davies is putting on his running shoes to raise funds for us. At a recent fund-raising sub group meeting it was suggested we get someone to run a marathon for us. It was agreed that we ask for volunteers via Social Media site twitter & our account @shropdisnetwork.

We tweeted on Shropshire Hour which happens on a Wednesday evening between8 pm&9 pm.This is a special hour whenShropshirebusinesses tweet asking/offering help.

“#shropshirehour anyone fancy running #Lake #Vyrnwy Half Marathon 15 Sept sponsors for us? Pl email enquiry@shropshire-disability.net Thanks”

For those unfamiliar with twitter a # (hash tag) attached to a word highlights that word and by doing so statistics will show what is trending on twitter. It enables those following a particular debate, news item or particular interest to be alerted to other similar tweets.

Within the hour a gentleman called Vic responded, we were even more pleased when we realised it was one of our own members. Vic has kindly offered to run not only the Lake Vyrnwy Half Marathon on the afternoon of Sunday 15th September but also the Shrewsbury Marathon on Sunday 23rd June 2013!

So what do we know about Vic, well he lives in the Church Stretton area ofShropshire. He is a family man and has visual impairment. Vic joined SDN last year and since January this year, behind the scenes he has been involved in some admin work for SDN.

I recently talked to Vic about this great offer and he told me he loves running. Vic runs because he enjoys it and said

“I may as well run these for SDN as I am running in the Shrewsbury Marathon, I have run the LakeVyrnwyhalf marathon before and as soon as the entry applications open on the 1st May, I will be booking my place”

Vic has run at events before but not for Charity. His facebook page often tells you about the run he has done that day and this is a taster of what he will record

“Good hard run this morning.” As well as messages like

“Flying this morning. New PB on my four and a bit mile route. Went well from the off and maintained a really strong pace on a perfect spring morning. Beautiful sunshine, light breeze, but still a little cool. Managed to run in shorts,…..”

The Board of SDN are so grateful to Vic for his kind offer that we are asking you to put both these dates in your diary. It would be great if you would support Vic, as he runs for SDN, raising money and promoting our organisation at the same time. We hope you will all get behind Vic and support his efforts.

Over the next few weeks we will be bringing you information on ways you can sponsor Vic in both of these runs. You can start already by making donation via JustTextGiving

Write the following text on your mobile phone SHDN12 £1

You can donate up to £10 in one text message, you pay the donation but the text message is FREE. If you are aUKtax payer you will also get the opportunity to Gift Aid your donation at no extra charge to you.

So watch this space as we bring you further news of Vic’s preparations, as well as tell you more about the different

ways you can help Vic and make donations in support of what he is doing for the work of Shropshire Disability Network.