“Awe Inspiring” just two words that have been used to described what? Have a read to find out!

SDN Members’ Meetings are always interesting, but sometimes they go way beyond that and the only adjective that will do is ‘great’. So it was at the meeting just before Christmas, where the three guest speakers kept the audience of about 45 members spellbound.

First up was a Shropshire soldier, Captain Nick Beighton of the Royal Engineers. Nick lost both his legs and suffered massive internal injuries when he trod on a landmine while on patrol in Afghanistan. Before that he was a very fit and active young man – with mountaineering, skiing, biking and many other high energy pursuits on his agenda. He lived life to the full.

Now, just four years on from losing his legs, He lives life to the full, with mountaineering, skiing, biking and many other high energy pursuits on his agenda. And for good measure he rowed for GB in the Paralympics London 2012 with him and his partner being beaten to a bronze by just 0.04 of a second in a photographic finish.

Nick didn’t paint himself as some sort of superhero, bouncing back against impossible odds. He left the meeting in no doubt about the physical, mental and emotional trauma he has gone through – and is still going through (his most recent operation was just two weeks before the meeting).

But his attitude to disability is that you just have to get on with life. Don’t dwell on what might have been, make the most of what is.

That philosophy also sums up the attitude of the second speaker, wheelchair racer Ben Rowlings, from Newport, Shropshire. A lifelong cerebral palsy sufferer, Ben described how his mother had brought him up to be tough and to solve his own problems.

‘When I was little, I fell over in a shop and she didn’t pick me up, which shocked people around us. But picking yourself up is what matters. And that attitude has helped me achieve what I have done so far both in life generally, particularly at school, as well as in sport.’

Ben trains very hard and follows a strict regime. He is happy to travel to get the best coaching available and goes to Coventry every week.

The achievements are already numerous, but Ben, who is only 19 years old, has a list of goals that he is working towards, both to compete against others – perhaps even in the next Paralympics – and against himself.

The third speaker began by describing himself as physically ‘at the other end of the spectrum’ to Ben and Nick. Tony Lawrence is a fully qualified Tai Chi instructor who specialises in teaching Tai Chi for arthritis sufferers & other disabilities. Tony has his own disability.

After a few introductory remarks about himself and the origins of Tai Chi as a form of martial arts in China many centuries ago, and the various forms that it can take, Tony put the meeting through its paces, encouraging everyone to try a few moves and get the feel of Tai Chi.

The type of Tai Chi he teaches to arthritis sufferers can be done either standing or seated, which is ideal for people with mobility problems.

An epic raffle, including two Christmas hampers, a Christmas Cake, Christmas Pudding and a large basket of Fresh fruit plus many other seasonal goodies, followed the three speakers. Many thanks to all those who made such a raffle possible as it boosted funds by some £82.

The next Members’ Meeting will be on Thursday13 March in Oswestry. More details will be published well in advance but if you want more information about our meetings please  contact |our Honorary Secretary Russell Price at secretary@shropshire-disability.net 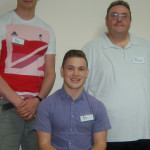 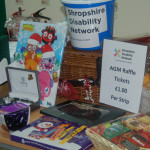 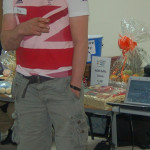