Kelda Writes: The Ramblings of a (technically) Failed Paralympian

I’ve always said that life is very much like a sat nav, you put in your destination and set off on your journey, but so often you come across hold ups or diversions that sends you on a different route….and sometimes you change your destination altogether.

Over the last 2 years I’ve been on the most incredible journey, some of it good, some of it not so good….and some of it bloomin’ amazing!! You never know quite where each turn is going to take you, and that’s never been more true than over the last 8 weeks.

Having failed to be selected for Rio, I was feeling pretty lost…..What was my goal? What was my motivation?…….

And then I was given the amazing opportunity to join the AGS Team. 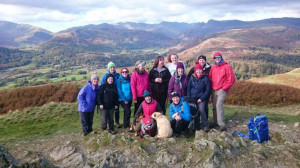 The Adaptive Grand Slam Team are attempting the mountaineering Grand Slam, that’s the 7 highest peaks in the 7 continents, plus the North and South Pole. This is no mean feat….especially when you consider that they’re attempting to do it with an adaptive team, something that has never been done before. So everyone on the team is either registered disabled, or has been medically discharged from the military as a result of injury.

So just after watching my team mates smash it up in Rio, I headed off to Chamonix for a training week preparing for a summit attempt of Aconcagua, a 7,000m peak in Argentina.

It was the most incredible week with an awesome bunch of guys, and a week full of challenges, support, teamwork….and lots of laughs!

I could easily write this whole blog telling you about the week, the training we did, the highs, the lows, and how stunningly inspiring the mountains were….but there’s actually a different message I want to say. Because for me, the week reminded me of the person I want to be, and the values I want to live my life by. It wasn’t about being ‘the strongest’ or ‘the fastest’ or ‘the best’….it was about working as a team, supporting each other, and the challenge was between yourself and the mountains.

It made me stop and think….was paddling 200m faster than anyone else really so important!! Don’t get me wrong, every athlete wants to win, that’s the whole point in beating yourself every single day in training. But what really matters, what really counts, is about giving it your best. And if every day you strive to be the best version of yourself, you look out for other people, and you live your life by the values that are important to you, that, if you ask me, is what’s really important.

And so I’m smiling on so many levels, because since the end of the racing season, I’ve also been able to put some real time and effort into Climbing Out, something that’s so close to my heart, and something that I feel I’ve neglected while I’ve been focusing on Rio.

To see the growth and development of Climbing Out and the young people involved is something that makes me so, so proud….and there’s some amazing journeys going to happen over the coming months and years with the charity, and these will be journeys that I know will take so many young people to new and exciting places too.

Last weekend we ran a taster weekend involving several organisations that are looking to send young people on our programmes in the future. The passion, energy and enthusiasm from anyone was evidence of the great work the charity is doing, and with everyone working together, we will undoubtedly be able to reach more and more young people in need of support in the future.

So for me, what an amazing journey it’s been, and I’m excited about where it will take me next, and the people we can help along the way.

I didn’t end up going to the place I thought I was going to, but where I ended up, well that’s a pretty awesome place to be!