Our Mission Statement is “Promoting and Raising Awareness of Invisible Illnesses & Disabilities, through the Organisation and Execution of ‘End User’ exhibitions. Aiming to connect people, groups and organisations to nurture effective sharing of information, advice and support.”

If you or you know someone with a disability, please tell them about this event and encourage them to attend. There will be a lot of information available.

Shropshire Disability Network have a stand today. Click here to find a list of our events: SDN-Dates-Events-for-August 2019 -Master

A new monthly ME Peer Support Group has been formed in  Oswestry. The group first met on Tuesday 15th January. Future meetings will take place on the 2nd Tuesday each month starting from tomorrow at 1 pm at Kinoculture, 9 Arthur Street, Oswestry SY11 1JN. 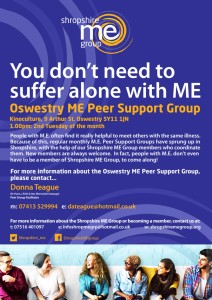 Support Groups also meet in Shrewsbury, Telford, Whitchurch and Ludlow. If you would like further information, please contact Donna Teague by telephone 07413 2599924 or by emailing da.teague@hotmail.co.uk Alternatively click this link for further information including an enquiry form that you can complete.

Fiona Newbury will be speaking about her research into the microbiome of M.E
Katharine Seton’s presentation will consider if there is an abnormal immune response to gut microbes in M.E.
We are delighted to have both speakers join us this year and look forward to hearing about their research given the current trend of thought that gut microbiomes are implicated with M.E.

Entry to the conference is completely FREE of charge, however we do welcome and encourage donation to help support the work of the Shropshire ME Group.

It is the ideal time for the many people around the country to come together, those who suffer form the illness and the their caregivers, to ensure as many people are told out M.E. as possible, and the thousands of sufferers are not forgotten just because they or their symptoms cannot be seen.

The week of events and awareness raising will centre around M.E. Awareness Day, a global event to highlight the illness and the many it affects, and is held annually on the 12th of May. The day’s origins are founded around the birthday of Florence Nightingale, who was said to have suffered from M.E. and was born on May 12th.

To find out about local events, click this link: http://shropshiremegroup.org/events/meweek/

Event title: ME Awareness Day
Venue: Darwin’s Gate, ( outside Blacks) Shrewsbury, Shoplatch SY1 1HS
Weblink: shropshiremegroup.org.uk
Name: Maralyn Hepworth
Email: maralyn4@gmail.com
Telephone: 01743 874254
Event description: Leading up to the 12th, Theatre Severn will be lit blue for ME Awareness week. Today we will be raising awareness in Shrewsbury Town Centre at the Darwin Gate Sculpture, between Mardol Street and Pride Hill.  Our volunteers will be on hand to give details about our group, M.E. and its symptoms, and how you can support someone with M.E.

Together Films understand how difficult it can be for people with chronic illnesses, disabilities, and carers to get to the cinema, so they are organising a series virtual screenings that give audiences who find it difficult to get to a cinema the opportunity to watch films. They are showing Unrest, with an opportunity to participate in a live Q&A session and be part of a shared experience.

The virtual screening for UK audiences takes place on the 21st of January, and will be accompanied by a Q&A with Natalie Wright. Tickets can be purchased by clicking on this link https://www.eventbrite.com/e/unrest-uk-accessible-screening-qa-tickets-41870082544

For more information about this film, including the opportunity to watch the film trailer click here https://www.unrest.film/

Kinokulture Oswestry are very pleased to be welcoming the Unrest Virtual Reality Experience team to the cinema in time to accompany the showing of “Unrest”, their November documentary.

An immersive journey into the creator and director Jennifer Brea’s experience of an invisible illness, myalgic encephalomyelitus, Unrest VR contracts the painful solitary confinement of a bedroom world with the kinetic freedom of an inner dreamscape. When you are too sick to leave your bed, where do you go?

The Unrest Virtual Reality Experience will be in the downstairs front room Kinokulture Cinema, 9 Arthur Street, Oswestry SY11 1JN and is open to the public between 11:30 am – 3:00 pm Tuesday 21st – Thursday  23rd November and for an hour before the screening of Unrest on Thursday evening. Find out more about Unrest & book online here: https://www.ticketsource.co.uk/date/397866

An immersive journey into the creator and director Jennifer Brea’s experience of an invisible illness, myalgic encephalomyelitus, Unrest VR contracts the painful solitary confinement of a bedroom world with the kinetic freedom of an inner dreamscape. When you are too sick to leave your bed, where do you go?

Open to the public between 11:30 am – 3:00 pm Tuesday 21st – Thursday 23rd November and for an hour before the screening of Unrest on Thursday evening. Find out more about Unrest & book online here: https://www.ticketsource.co.uk/date/397866

Look out for an award winning documentary coming to cinemas near you. Released on 20th October “Unrest” follows director Jennifer Brea and her experience with Myalgic Encephalomelitis (ME) or as it is sometimes more commonly known, Chronic Fatigue Syndrome (CFS)
Jennifer Brea was a journalist and academic studying for a PhD at Harvard when, months before her wedding, she became progressively ill, losing the ability to even sit in a wheelchair. After several misdiagnosis, her response was to start filming from her bed, gradually collaborating with film crews in the UK and around the globe, to shed light on the world inhabited by millions of patients.The film offers a fascinating window into the toll of ME and a chronic illness.
You can view a trailer here: https://www.youtube.com/watch?v=JvK5s9BNLzA

The aim of the Unrest campaign, is to raise awareness, grow community, and advance science, policy and medicine. If using social media use #TimeForUnrest to help educate people about this illness.

Event title: Unrest (A journey about ME)
Venue: Ludlow Assembly Rooms, 1 Mill St, Ludlow SY8 1AZ
Name: Ludlow Assembly Rooms
Email: N/A
Telephone: 01584 878141
Event description: This is a new film released on 20th October 2017. Jennifer Brea, 28, is working on her PhD at Harvard and months away from marrying the love of her life when she gets a mysterious fever that leaves her so ill she can’t stand, confined to her bed, often in excruciating pain, and looking for answers. Disbelieved by doctors and determined to live, she turns her camera on herself and her community – a hidden world of millions confined to their homes and bedrooms by Myalgic Encephalomyelitis, also known as Chronic Fatigue Syndrome.