Being nominated for a Shrewsbury Town Mayor’s Award is a real honour. It is a grand evening when “unsung hero’s” who make a difference to Shrewsbury are recognised at the annual event. When our Chairperson received an invitation to the recent awards evening, what happened that night was “beyond belief”

We took Gold in the Community category. The certificate says “In recognition of your achievements towards enhancing the social wellbeing of the area” 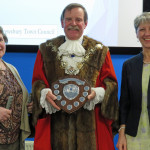 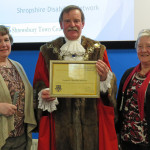 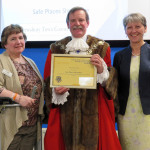 Ruby said “I was invited to take one guest so I invited Jill Buckley to join me for this special evening. Jill has been very supportive of SDN, especially at fund-raising events as well as ensuring the deaf community have a “voice”. I would have like to have taken everyone with me who supports us, but obviously that is not possible so I want to take this opportunity now to thank all who make SDN what it is as without you it would not be possible. You all make up what this award means to us”

It really was a night to remember because Mayor of Shrewsbury, Councillor Miles Kenny also     presented Safe Place Shropshire which we lead on with Gold in the same category. Celebrations did not end there as they won the Community category outright & now proudly show off both their certificate & the shield which they hold for one year. Ann Shaw former Equality & Diversity Officer for Shropshire, Telford & Wrekin who initiated the scheme in the county also joined Ruby for the night.

Ann said after the event “It was such a good evening. I’m thrilled that all the hard work has been recognised”. Referring to Taking Part, OSCA, SDN, Jo & Jess. Ann continued “Well done all of you. Without your commitment & time given, this scheme would never have got off the ground”

We hope you will all get opportunity to see all the awards when you are out & about at events, at meetings etc. We also take this opportunity to congratulate all who were presented with awards. It is a night to remember and we are proud to have been part of it.