The 3 weeks since we came back from Brazil have been pretty tough. I think I must have thought I was going to come back as some kind of speed machine….unsurprisingly, that doesn’t seem to have happened!! We’ve introduced some new technical points, and I’ve been really struggling to get my head around what I’m trying to do….and the harder I’ve tried, the slower I’ve seemed to get! We’ve also introduced a new gym programme for me. We recognised in Brazil that I wasn’t hitting the targets I needed to be hitting, and that we were going to have to shake things up if I was going to make the improvements I need to make within the time frame I have before selections. And shake things up we certainly have!!!! 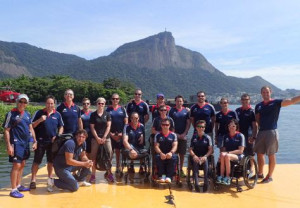 My new gym programme is brutal! Although I can feel it will give me the gains I need, at the minute I’m feeling pretty broken after every session! This isn’t helping me to feel good on the water, as my arms and legs just feel like jelly! However, our motto in Brazil was “Train Insane or Stay the Same”…..so I guess I’ve just got to keep pushing through it!

I’ll be honest, I’ve let a bit of self doubt creep in over the last couple of weeks, and self doubt can be a dangerous thing! It’s understandable why this has happened, it feels like a long time since I had any evidence to give me any reason to believe I’m capable of hitting the times I need to hit. But sometimes we just have to keep on going and work through the difficult patches….after all, if it was easy everyone would be doing it!

And then I watched the Scotland v Italy rugby match at the weekend. Scotland were outstanding in their relentless drive, but after one of their players was yellow carded and sent off for 10 mins, they could easily have let their heads go down. However, instead they kept pushing, pushing, pushing…..and then they scored!

As the commentator said….”They were a man down, but they had the belief”

I realised I need to be more like them…..even when things aren’t going well, even when your the underdog, if you keep believing you can do it, then anything is possible. I certainly don’t want to miss out on selection just because I didn’t “think” I could do it!

I want to be part of that squad that will be racing on the lake in the photo below in September. I know it won’t be easy, but there’s certainly no time or room for self doubt. So next week I’m going to be attacking my sessions with belief and commitment…..it’s my choice, I can let my head go down, or I can come out believing, just like Scotland did!

As Greig Laidlaw, the Scottish Team captain said: “Always get out of the champions side of bed”

Aside from training, Climbing Out is gearing up for the programmes that will be running this summer. I’ve had to take somewhat of a back seat with Climbing Out while I focus on training, and I’ve found this difficult….I feel very guilty that I can’t give the commitment to the charity that I have in the past. However, I hope my personal journey will inspire and motivate many of the young people we work with and give them the belief that life isn’t about the set backs we face, but how we deal with them.

The link below shows a short video that was made during one of the Climbing Out programmes last year…..please take a look, if ever there was any reason to believe that anything is possible as long as you believe in yourself, then it’s right here in the next 3 minutes!