It’s been a pretty brutal few weeks of training….and so it should be – we’re talking about the Olympics, not a village fete!!

I’ve pushed myself to my absolute limits over the last couple of weeks, and just when you get to the point that you think you have nothing left, you find a bit more! As my great friend and 5 x paralympian Marc Woods keeps telling me….”that’s where the medals are won!” I’ve had to keep reminding myself of that at those times when my heads gone down and I’ve just wanted to stop….and there’s been quite a few of those I can tell you!!!

But the awesome thing is, when you keep pushing through, in time, the gains start to happen. I’m feeling a little broken but strong, and I’m excited about the impact that all this will have on my paddling.

I’ve set myself some pretty ambitious goals for 2016, but I’ve got a new found confidence about making them happen!

Sometimes you can become a little bit obsessed and all consumed in training, but last Friday I was able to put things very much back into perspective. 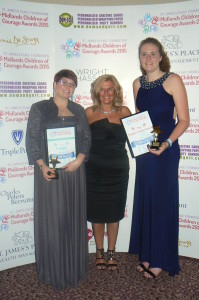 I attended the Midlands Children of Courage Awards, where two young people from Climbing Out had been nominated for awards.

It was an amazing evening with so many inspiring and incredible stories. I was so proud of all the young people that attended the awards to support Chelsey Dixon and Molly Evans, the two girls nominated. The friendship and support that was so evident between all of the young people was something very special to see and made me realise just how much long term impact Climbing Out is having on the lives of the young people we work with.

It was a very special evening, with Molly winning “Fundraiser of the Year” and Chelsey winning the “Stephen Sutton Award”.

Chelsey’s award meant so much, not just to Chelsey, but to all of the young people attending. Many of them had known Stephen before he died, and in the past they’d often talked to me about him and I could always tell how much they thought of him.

For Chelsey to win the award in his memory was a very special moment, and I know how much it meant to all the young people to talk with Stephens mother at the end of the evening. Thank you to The St James’s Place Foundation for hosting such a special night.

Gold medals of course play a massive part in my own personal journey at the minute, but when you meet such inspirational young people and appreciate the challenges they’ve overcome and the incredible things they’ve achieved, it really does keep your feet on the ground.

Yes, medals are important, and I’ll be doing my utmost to make that happen, but let’s never forget to keep things in perspective.