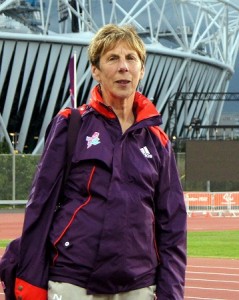 Well I have saved my last blog for the end of the most exciting Paralympics of all time.  I have tried to give you a taste of what it was like behind the scenes of the training venues and the Olympic Park. Towards the end of the first week we almost knew all the athletes by name and the relaxed atmosphere gave them time train in peace away from the madness of the stadium.

As the competitions progressed and medals were won or lost, we saw fewer and fewer athletes.  Towards the end of the second week we were transferred to the main stadium.

Obviously, the warm up track was very very busy.  Squabbles between the wheelies and the bladerunners developed (I kid you not) and diplomacy had to rule the day dividing the track into separate lanes. It all ended peacefully, well nearly always peacefully.

I got used to being asked to find a lost “leg” Where did you leave it?  The answer- well I left it leaning against the wall but it seems to have walked!  The leg(s) were nearly always found either on the bus! or in the shower.

I never quite got used to seeing Gold medalists strolling past always interested in what we were doing as a volunteer, or being treated like a celebrity in the local bakery.  In the queue people nudging and smiling saying how much they enjoyed the games and what a good job the Gamesmakers were doing.

On the final night of the Games I sneaked into the stadium and caught the final track races, the final competitions in the shot and high jump. So exciting to watch the guys I had assisted in training. It all seemed so surreal.  I crept out early to avoid the rush of 80,000 hysterical sports fans trying to get onto one tube. The walkway towards West Ham Station under the London 2012 archway was surprisingly quiet. I was on my own except for a few other people strolling home, plus groups of Gamesmakers waiting to wish everyone safe journey.

I stopped and so did 2 other couples.  We turned silently almost together to see behind us the lights of the 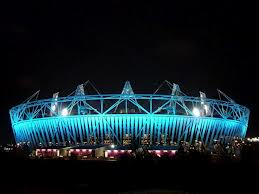 stadium blazing into the night sky and a huge illuminated Olympic torch attached to an office block turn red, white and blue.  The silence was shattered by a deafening roar.  That would be Oscar Pistorius winning the last gold medal of the evening. We all looked at each and smiled and carried on down the path.  It will be my everlasting memory of a wonderful time.  I shed more than a few tears.

The legacy must go on.  It wasn’t just about the winners but those who overcame such dreadful disabilities and achieved their own goals, and the poorer countries who had struggled to fund even one athlete they must not be forgotten.

Where do we go from here?  Well we must carry on the legacy in our own special way. Life goes on as normal but even small changes will make all the difference.  My purple people uniform has been washed and ready to go in the memory box but never to be forgotton.     Roll on Rio 2016!