Oswestry Community Games provides a celebration of what is going on in Oswestry and opportunities to participate in a wide range of sport, physical activities, arts and cultural activities on display and with “Have a Go” sessions. People of all ages are welcomed and inclusion is a very important part of the Games.

We have nearly 300 Safe Places across the county and more organisations are signing up weekly as people get to know more about the scheme as it helps those who are or feel vulnerable when out. It is also assurance for carers, especially carers of people with Learning Difficulties & Mental Health issues.
Look out for the team today as we revisit places who are already part of this initiative and as we sign up more.
To find out more click on the Safe Place tab on this website.

Do invite others to come along if they are interested in improving standards, eliminating discrimination and facilitating inclusion, participation and independence for all people with disabilities & acquired injuries.

This quarter we will be talking about & guided on Shropshire Council’s complaints procedures. Click here for more details: pdf-poster-06-12-2016

This is a very important Forum of Interest for the VCSA and there are many organisations on our Forums membership. Please if you are a rep of one, do your best to attend and support your colleagues.

However if you wish to know more about this group please contact pauline@pdfshropshire.co.uk

Secure your place on the “Dementia Awareness for Retail and Hospitality” workshop with an early booking, as place are limited. It is FREE to attend.

Click here for poster: Second Date ONLY – Dementia Awareness for R&H A4

The workshops are free to attend and are led by colleagues from the University of Wolverhampton’s Faculty of Education, Health & Wellbeing.

Click here for flyer: Second Date ONLY – Dementia Awareness for Carers A4

IDAHOT is an annual worldwide event with the aim of raising awareness of LGBT rights violations and stimulate interest in LGBT rights work worldwide. The 17th May commemorates the date when homosexuality was removed from the International Classification of Diseases of the World Health Organisation (WHO) in 1990.

For the past two years, a Gay Propaganda Law has been in force in Russian-dominated eastern Ukraine and Crimea. “This Is Gay Propaganda: LGBT Rights & the War in Ukraine” follows several LGBT and feminist who, after horrific experiences at the hands of Kremlin-funded militias, have fled eastern Ukraine for the relative safety of a shelter in Kyiv. It also investigates the rise of hate crimes and nationalist fervour in central Ukraine, and the creative resistance of the LGBT activists as they organize for their first Pride Day since Euromaidan.

Tickets on sale though Eventbrite.

I always anticipated that this journey would be full of ups and downs, but the last few weeks have surpassed any expectations I could’ve had!

2 weeks ago we had our final performance testing before the Games, and although I’d made some improvements, I didn’t show the big gains I was hoping for. However, I’ve been working hard on increasing my intensity and aggression, and when it came to the time trials on the water last Saturday I was confident I would deliver what was needed. 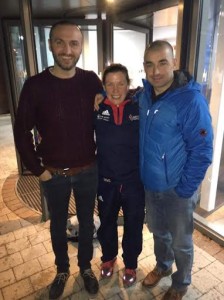 It was a windy day, but for once we were paddling with a tail wind, and I paddled what I felt was the best 200m I had ever done. I was buzzing! Finally I’d delivered the performance that I knew I was capable of…..and then I got my time. 56 seconds. Still slow, still a long way off the time I need to hit!

I was distraught. What else could I do! I’d given it my all, I wasn’t sure if I had anything else left to give. A fair bit of sole searching went on that weekend…..but I didn’t really come up with any answers. I couldn’t even work out what the questions were!

I then had a meeting with my coach. “You’ve just got to work harder” he said. Harder!!!! How can I work any harder! I really felt I had not an ounce more that I could give!

Ok, I’ll admit, I got a bit emotional….some might even say irrational (just for a change!). But I’ve always been a fighter, so I was sure as hell not going to give up! So after putting things into perspective and some fantastic support from the incredible people around me, I started to come up with a plan. I’m very much an actions kind of person, and once I’d started to put this plan together, I began to see a way forward.

And then Thursday happened…..

I’ve mentioned HBP Training before. They’re a performance coaching company who are giving me sponsorship in the form of mental coaching and support. They had a few ideas that they thought might help. So on Thursday I met with Phil Quirk from HBP. He talked me through a few ideas, and recognised that potentially one of the reasons I’m not seeing the gains from the intensive training I’ve been doing, is that I’ve been trying too hard, getting stressed and getting tense….this then has a detrimental effect on my paddling, which makes me more stressed, more tense…and makes me try even harder….and so the cycle continues!

We worked on getting me to relax….the complete opposite of what I thought I needed! I believed I needed to get more aggressive, more intense, paddle harder, paddle faster…..what Phil got me to see, was that actually what I needed to do was relax! If I relaxed then I could allow my body to use the power that’s just sitting waiting to be released!!

It was an amazing session, and I came away confident about the way forwards. One of the best things that Phil said to me was “We’ve got this.”To feel that I wasn’t on my own, that they were there beside me, supporting me to be the best I can be, really did give me a huge amount of confidence…..and I thank them both for giving me that.

The next morning I was sat on the start line, about to do another 200m time trial, and I just said to myself “Relax, we’ve got this”.

Now I can’t say I went out and smashed the World record, but I did paddle considerably better, knocked approximately 2 seconds off my time…..and enjoyed it a whole heap more!

I’m not saying this is going to provide all the answers, but that realization that sometimes when we try too hard, we can actually prevent ourselves from achieving what we’re capable of really will, I hope, give me a different approach to my paddling. The real learning for me is to relax, stay focused, control the controllable and don’t waste valuable energy stressing about things that I can’t control…..then I’ll put myself in the position that the gains can start to happen!

As they say….”Every day’s a school day”, and whether it’s an up or a down, there’s always something to be learnt. Gradually, I’m piecing all those leanings together, and when all those jigsaw pieces finally fit together…..I’m gonna be so fast you won’t even see me coming!!!!:-)

The aim of this group is to offer information, encouragement & friendship to people affected by Macular Degeneration.

The Macular Society, now has over 270 local support groups, which exist to provide advice and support to people affected by macular conditions, their relatives and friends across the British Isles. They provide a number of free services and offers a range of information about living with macular disease. You can also telephone their specialist helpline on 0300 3030 111.

Please come along and hear about the work they do throughout the county of Shropshire. Take a peek here www.shropshire-disability.net

For more information about Telford 7 Wrekin Fibro support group, please look us up on face book or email tandwfibrogroup@yahoo.co.uk or call Helen on 0844 887 2392

We expect to go into the Boat House for an initial chat and then have time to go on the rowing machines in the club house before going outside when we will find out more about the boats themselves and familiarise ourselves. If we are happy then folks can get into boats with the help of volunteers and experienced people from the boat house to do some simple exercises on the river itself. No one will be made to do anything they aren’t comfortable with and we will have lots of sighted helpers for the day.

A note about clothing:

Please do not wear jeans! It’s best to wear sports clothes and trainers (waterproof if it’s raining). Also, no ‘open pockets’ either wear clothes with no pockets or pockets that can be zipped up – this is because sometimes the oars can get caught in people’s pockets.

Directions if you are driving are:

Come along the A488 Porthill Road and turn left after the Boat House pub (or right before it, depending on which way you are coming from) then proceed over the cattle grid down to the Pengwern boat club where you will find parking right next to the club.

If you need any more information on anything above please do contact Rachel on 01743 342163 or shls@shropshire-rcc.org.uk