All the fun and adventure of the Geoff Forgie Disability Challenge – in pictures. Plus the latest news, and not forgetting our new Services Directory.

Event title: Subtitled Screening of Hope Springs at Old Market Hall Cinema Shrewsbury
Start date: 07/10/2012
End date: 07/10/2012
Start time: 5.30pm
End time: 7.30pm approx
Venue: The Old Market Hall Cinema The Square Shrewsbury
Event description: Hope Springs (12A) Keen to spice up her marriage and reconnect with her husband, Kay attempts to persuade her sceptical husband, a steadfast man of routine, to get on a plane for a week of marriage therapy. Just convincing the stubborn Arnold to go on the retreat is hard enough â€“ but the real challenge for them comes as they shed their bedroom hang-ups and try to re-ignite the spark. David Frankel (2012) USA 1h 39m Meryl Streep, Tommy Lee Jones, Steve Carrell If you have a disability you are entitled to receive 50% discount off full price seats. Should you need the service of a companion, their ticket is also half price. Proof of eligibility will be required. Patrons must state discounts and produce proof of eligibility at the time of booking, as discounts cannot be applied retrospectively. Subtitled screenings are not currently available to book online but we hope to resolve this soon. In the meantime, tickets may be booked at the Old Market Hall, Theatre Severn or by telephone 01743 281 281

Event title: Go Walkies to Celebrate the start of National Guide Dog Week
Start date: 06/10/2012
End date: 06/10/2012
Start time: 10am
End time: 2pm
Venue: Battlefield Farm Shop,Cafe and Heritage Museum, Shrewsbury SY4 3DB
Event description: Shrewsbury Branch of the Guide Dogs for the Blind are holding a sponsored dog walk to raise awareness of the difficulties that blind and partially-sighted people face every day. This is an opportunity for anyone with a dog-whether a guide dog or family pet-to go on a 1.5 mile rural circuit at the Battlefield Heritage site, Upper Battlefield, on the northern outskirts of Shrewsbury. Entry and car parking is FREE and is off the A49 opposite Halls Livestock Market. The walk will start and finish by the Battlefield farm shop, cafe and Heritage Museum. It will take people around the Battlefield church and adjoining field. Sponsorship forms or further information can be obtained from Alan White.

Event title: Charity Soul & Motown Night at Greenhouse Meadow to support 2 Charities
Start date: 26/10/2012
End date: 27/10/2012
Start time: 7.30pm
End time: 1am
Venue: Greenhouse Meadow, Otley Road Shrewsbury
Event description: The evening will feature live music from Men in Black plus a Northern Soul Disco. A quality hot buffet will be available while there will also be a raffle with a host of exciting prizes. Andrew Bunton, Shrewsbury Town’s hospitality manager, said it promised to be an exciting night and he urged people to get their tickets quickly with demand expected to be high. The idea for this night came from Ron Brown, one of our Sovereign Club members, and we thought it would be a good idea to make it a charity event and give proceeds to two worthy causes. “Ron is a member of Men in Black and we’re looking forward to seeing them play. All the money will be split between Shropshire Air Ambulance, a charity close to people’s hearts, and also the Shrewsbury Breathing Club which Dr Bob Wilson, one of our club doctors, is affiliated to. The club have donated some very nice prizes for the raffle and so have Tanners Wine Merchants. Tickets are now on sale priced £18 each with Â£8 from every ticket guaranteed to go to charity. Reserved tables of 12 are also available at a cost of Â£200. Tickets are not available on the night and must be bought in advance, either from the Greenhous Meadow ticket office during normal office hours, or by phoning (01743) 289177 option 2.

SDN were delighted to be yet again blessed with good weather for the Disability Challenge last Sunday, September 16th. Many of you will recall last year when we did the Walk & Roll in Shrewsbury Quarry the weather came good just when we needed it!

Any walkers at Carding Mill Valley on Sunday may have been surprised to see a large white marquee erected and to the side a green First Aid tent hosting qualified First Aiders, all ready in the event of mishaps.

A large number of people were busying themselves with either fixing frames to wheelchairs, setting up a refreshment area for our volunteers or putting SDN information stands up. At various locations along the route there were Marshals, who as well as Raynet, were able to keep contact with one another as well as those at base so all would be kept informed on what was going on. Dave’s team soon expanded as at 9am the first team “Shropshire Fire & Friends” arrived to carry pioneer Daisy Nash (Olympic Torch Bearer 2012) as far as Pole Bank, which is the highest point on the Long Mynd, before looping round and returning to base via The Burway.

One of the first pioneers to arrive was Debbie Brennan, Paralympian Gold Medallist from Sydney 2000. Debbie brought along her racing chair together with her gold medal. Many people talked with Debbie about her experience and were delighted to be photographed with Debbie and her medals. Debbie was pioneer for team “West Mercia Ladies”. Daisy Nash from Telford who was Olympic Torch Bearer in Kidderminster on 24th May 2012 brought her torch along enabling people a rare opportunity to hold an Olympic Torch and be photographed with her and Debbie.

Sue Forgie, wife of the late Geoff Forgie, together with Debbie Brennan & Sonia Roberts, Chair of SDN, officially started the event at 10am with Team 1 “Shropshire Fire & Friends” setting off on their journey. Teams set off on the challenge at about 15 minute intervals, this gave space to each team. 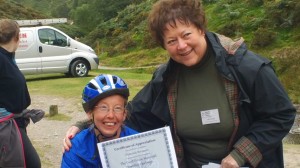 Time went very quickly as it was soon time for “The West Mercia Wheezers” to set off with their pioneer Ruth Fairclough. Although the skies started to cloud over, everyone was so happy talking, and mingling with each other. It was amazing how many walkers and dogs were around on this Sunday morning and it was good to have chat to some. Our own supporters, to the delight of dog lovers brought their canines along to be fussed and be part of the action.

We did not expect the first team to be back until after 1pm as it was expected the Challenge would take between 3 and 3 ½ hours. To our surprise teams arrived home earlier than expected. Debbie Brennan pioneer for “West Mercia Ladies” were the next team to set off, soon to be followed by “Team GDF” (Geoff David Forgie) Jess Forgie, Geoff’s daughter was team leader with SDN member Hilary Fisher being pioneer. 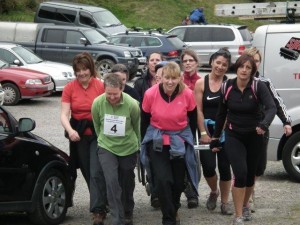 “Bridgnorth Aluminium” realised a dream come true for Will Martin by carrying Will in his wheelchair over the course. Last team to go was “White Watch Shrewsbury” with pioneer Alan Townsend (SDN member) Alan said prior to the event “to be carried like this I will feel like a king” anyone looking at the returning photographs will see Alan return in style-Like a King! 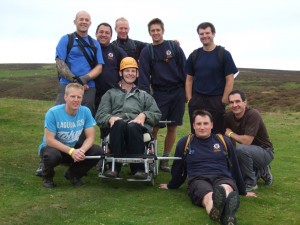 First team back were “The West Mercia Wheezers” with Ruth Fairclough. Ruth said “It was great fun, the beginning bit, I was a bit nervous but then I put my total trust in the team and it was great, really enjoyed it”

Nic, from “Shropshire Fire and Friends” said “It was very well organised. The best bit was showing Daisy the sights and seeing her smiling face, especially as we free wheeled her down the slope!!! It was an absolute pleasure to be involved….”

Debbie Brennan said “I have not done a challenge like this before. Most challenges are done on your own, this was different, it was great…”

Hilary said “Absolutely brilliant, the sun came out at the right time….”

Sue Forgie said “Geoff would be really proud of this. He loved enabling people with mobility problems to get to places they would not normally go. For the first year, the size of the event was just right. It has been a really good day, no mishaps, all has gone well….” Sue, as each team returned to base, presented each pioneer with a certificate acknowledging their participation.

Everyone was smiling and laughing, eager to tell those back at base what a wonderful adventure it had been. A welcome cup of soup and roll together with tea, coffee and water was most welcome by many people.

We were delighted that our own amazing grace Grace Hough who blogged so well for us from the Paralympics London 2012 came to support us in the afternoon. It was good to talk more about her adventure and what She hopes to do in the future.

Thank you to all teams, volunteers, pioneers and to Dave Hewetson for being lead in organising this event. Thank you to all our sponsors, and anyone involved in making the first Geoff Forgie Memorial Disability Challenge happen.

May be you were in a team or a pioneer last Sunday, if so Shropshire Disability Network would be delighted to receive your comments or even a blog of your venture-it does not have to be long. We want to share this event with as many people as we can. We will have photographs on our website. Face Book users will also be able to access many photographs & we use twitter as well.(@shropdisnetwork)

A big thank you to all who have been involved in any way, there are too many people to mention individually by name.

CONCERT IN AID OF

(Riding for the Disabled )

For the text only version of YourVoice, click here