Do Treatments For ME/CFS Work?

Open to anyone with an interest in Myalgic Encephalomyelitis or Chronic Fatigue Syndrome. Admission free (Donations to Group funds welcome). Raffle and Refreshments available. Further Information on the illness and Shropshire ME Group will be available at the conference.

Trevor Dickenson from SDN attended an event in Birmingham on behalf of SDN.  He shares his findings from the day with you.  It makes very interesting reading and will be useful to anyone considering moving to a Personal Budget

After a very fraught train journey out of Wellington on the 08.45 train, a train that should have consisted of four carriages on a very busy morning with commuters, students and race goers off to Cheltenham for the day, that in fact only had two carriages I found myself in a queue for taxis outside New Street Station in pain and aching after standing almost all the way from Wellington.

When my turn for a taxi arrived I almost fell into the back seat “where too” said the driver.  Of course, I had forgotten to get the address out of my bag, “give me a second” I replied, fumbling in the bottom of my bag for the piece of paper with the address on it, “just give me part of the address” said the cabbie!  I remembered it was “138, Digbeth” and shouted this out to him, oh, that’s the BVSC building he said, “that’s it” I said and we where off.

Five minutes later we where outside the BVSC building, I paid up and the cabbie kindly helped me out of the taxi.  Having never been to the BCVS before I was impressed with the building and their set up.  Meeting room 3 said the notice board so off I went in the direction of meeting room 3.  Having made quite good time I was the second to arrive.  The administrator from NCIL was already there “no coffee until 10.30 unfortunately” she said so I sat and gathered my thoughts for a while.

First the coffee arrived then the rest of the delegates along with no less than three various types of assistance dogs, “this could be fun” I thought, but in fairness they where all on their best behaviour and I didn’t hear a whimper all day.  There where five of the delegates in motorised wheelchairs and as meeting room three was not that big there was lots of shunting and banging into tables all day, but we managed.

The first presentation was entitled “Is there a future for Independent Living”, there was a short presentation and this was followed by some lively debate on the subject.  There seemed to be a consensus that Independent Living was being threatened by Personalisation and the onset of personal budgets with some delegates putting up evidence to support this theory.  Some delegates even said that they thought that under the Big Society “care in the community actually means care by the community”.  Most people seemed to agree that “the full understanding of independent living is less than it was” and that we all need to “fully resist Government attacks on our quality of life and our personal aspirations”

The meeting then went on to look at two surveys being undertaken by a group called In Control in conjunction with Lancaster University The two surveys where directed at people who have a personal budget and their family members and/or carers and they are entitled:

1) People who have a personal budget.

2) Family members or carers of people who have a personal budget.

After much discussion and a good look through the paper copies of the two surveys the whole group where encouraged to discuss the surveys with their own individual groups and if possible install links on their groups web sites to encourage people with personal budgets and their families and carers to fill out the surveys on line.

If you have a personal budget you can take part in the surveys by following this link:

Or you or your family or carers can also print out an EasyRead version of the survey and fill it in on paper, sending it back to:

If you do hold a personal budget, please try to fill in this survey and get your own views heard.

The intention is to keep the survey open and ongoing and build a national data base.

They will then be able to look at the data set and compare changes over time.

The Council of Disabled People will be attending the march against cuts in London on the 26th March, in response to the continuing air of uncertainty concerning the impact those cuts may have on their living standards

DPAC intends to demand ‘Rights not Charity’; the protest march will assemble at Victoria Embankment in London at 11am. For more information, visit www.dpac.uk.net. 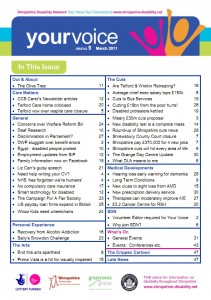 Once again we are pleased to publish another edition of Your Voice, packed with news and views on matters of interest to people with disabilities, their carers and supporters, in Shropshire.

Hosted by the Community Council of Shropshire and funded by the Shropshire Infrastructure Partnership, this will be a workshop-led event.

The Big Society is now well and truly on our radar, but can a voluntary and community sector facing unprecedented funding pressure make it all happen? Come and meet some of the leading Big Society minds and help find new ideas and solutions for our sector.

This half-day conference will be of special interest to you if you’re responsible for communications, community engagement and

driving the Big Society agenda, to: